[This series of blog posts on the runes is based on a talk I gave at the Black Flame PDX event in Portland, OR on April 27, 2019]

In the most mundane sense, runes are characters that were used for writing the Germanic languages prior to the adoption of Roman alphabet. Drawing on the etymological data, and historical and modern uses of the Runes, however, it is clear that the concept of a rune is first and foremost that of the archetypal Mystery that underlies all things, actions, and occurrences. The characters, especially in acts of what I will call operative communication, or magic, are both representation of and gateway to the true Mystery which always lies hidden behind them.

Thus, we must avoid the temptation to think of runes as being just the symbols – they are gateways or perspectives on the Rune, or Mystery itself. The individual runestaves are symbols by which a sentient being, cognizant of its own limits of self-definition and relationship to the objective universe, comes to know more about itself and that relationship.

Rûna – the oldest written form of the word “rune” – is the ultimate Mystery, the sense of the hidden that draws forth those receptive to its call in a never-ending quest to explore and understand the mysteries of existence. Far from being another form of mysticism, the pursuit of Rûna is the path toward clarity: as one mystery is comprehended, another lurks just beyond, but what has been uncovered is now made part of the understanding and experience of the discoverer – and indeed, some Mysteries are beyond even our basic awareness of them until certain levels of self-development, or initiation, have occurred. Line 143 of the “Hávamál” from the Poetic Edda, about which I’ll have more to say in a bit, embodies this ongoing quest:

Cognates of the word rune appear throughout older Germanic languages. For example:

The proto-Germanic root *rûnô has been present since the beginning of the written attestation of the Germanic languages. The first substantial Germanic text is the translation of the Bible into the Gothic language by the Bishop Wulfilas in the 4th century. Wherever the word μυστήριον (mystérion), signifying ‘divine mystery’, occurred in the Greek text of the New Testament, Wulfilas translated it as the Gothic word Rûna. The survival of the word and concept of Rûna, virtually unchanged in so many descendent languages except through the results of regular and predictable sound changes, speaks to the importance of this particular cultural perspective among the Germanic peoples.

Rûna is specific to the sacred and magical/operative semantic field, and the word predates the attachment of the concept to the characters that provide specific perspectives on it. Old English stæfr or Old Norse stafr – both meaning “stave” – were traditionally used to refer to the signs themselves, with their description as “runes” on runestones or in various pieces of lore being a primarily metaphorical association. Generally I will use the word ‘staves’ or ‘runestaves’ to refer to the characters themselves, and ‘runes’ when talking about the mysteries underlying and transcending them.

Runestaves have a long history. As they are among other things a gateway to specific types of lore and magical practices reaching back approximately two millenia, it is necessary that we review some of the more important and significant aspects of this history in order to situate our understanding in the proper context.

First, we must understand where the different forms of the staves fit into the timeline of the Indo-European language family, and specifically the Germanic sub-group.

The hypothesized proto-Indo-European language is the ancestor of the majority of the languages that arose in Europe and western Asia and are still spoken today. A conservative estimate for its origin is approximately 3500 BCE. Significant descendent languages (which themselves stand at the root of broad sub-families) include Sanskrit originating around 1200 BCE, Greek around 800 BCE, and Latin around 4-500 BCE. The Germanic sub-family was a later development, dating to, at the latest, a couple of centuries before the beginning of the common era. These dates are all approximate due to the fluidity of language change and the often limited availability of evidence.

Gothic, of the now extinct east Germanic languages, was the first attested member of this group. Further developments of the north Germanic languages become Old Norse and later modern Icelandic, Danish, Swedish, Norwegian, and Faroese. The west Germanic branch develops into modern German, Dutch and Frisian, and also Old English, which of course becomes middle and then modern English with the influence of Norman French and Old Norse.

The oldest universally accepted runic inscription is the Vimose comb, found in Denmark and dating to approximately 160 CE. Historians of writing by convention place the development of a particular form of ancient writing at about 200 years before the earliest find – it’s unlikely you happened to find the very first thing written in a particular script, and the earliest examples of a particular form were often done on perishable objects. Thus we can confidently place the origin of runic writing as early as the mid 1st century BCE, and perhaps another or century or so earlier based on other possibly runic finds.

The different rune rows, depending on time period, are each referred to as a ‘futhark’ or ‘futhork’ due to the sound values of the first six characters (similarly to how we use the term ‘alphabet’ due to ‘alpha’ and ‘beta’ being the first two letters of the Greek alphabet). There are three primary historical rune rows, showing only minor variations in the forms of the individual characters over their history.

The Elder Futhark of 24 staves, sometimes called the Common Germanic Futhark, was in use until around the year 750 CE.

The Younger Futhark, which underwent a reduction in characters from 24 to 16 despite a simultaneous expansion in the sound system of the Old Norse language, was in use from around 750 until it was largely supplanted by the Roman alphabet in the late middle ages.

A separate development branching off not long before advent of the Younger Futhark, is the Anglo-Frisian Futhork consisting of 29 to 33 runes depending on timeframe and location. These runes are first attested around 500 CE.

There is one significant modern variation based on the Younger Futhark, the Armanen runes of the late 19th/early 20th century Austrian mystic Guido von List. I’ll have a bit more to say about them later. 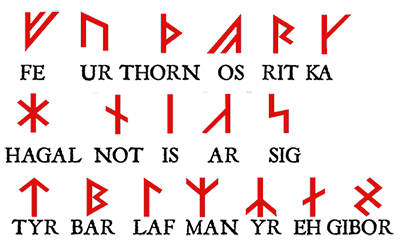 The order and symbols remained remarkably consistent over long years, implying both a deep desire to maintain a specific tradition as well as regular contact among widely scattered people to spread and maintain that tradition. The names of the runes are themselves words with meaning. For example, the first four runes of the Elder Futhark, with their reconstructed proto-Germanic names, are:

This representation of single characters signifying both sound and words with specific meaning is unique to the Germanic language family within the alphabets developed to write Indo-European languages. The association of the words with the individual rune staves is both literal but also highly symbolic. For example, *fehu carries with it associations not just of the exoteric meaning of movable wealth but also the implications, benefits and drawbacks of wealth. Further into the symbolic realm, it also suggests the ability to acquire not just external wealth but also the internal acquisition of more Being and Self-knowledge which can be transformed into visible external manifestations.

I won’t go much into the original development of the characters of the runes here, but this attachment to meaning does strongly support the idea of the runestaves having evolved from a pre-existing sign horde; these signs were then blended with some characters in Mediterranean alphabets as the Germanic tribes encountered them. Thus the meaning and inner significance of many if not most of the runestaves far predates the time when the surviving inscriptions were first written down. It is significant that the preferred medium for writing runes was and remains wood, which greatly influenced the style and shapes of the individual staves; thus, untold numbers of inscriptions have been lost to time.

The names of the runes of the Elder Futhark were never written down in the archaic period. They have been reconstructed as Proto-Germanic words based on the rules of sound change established through historical linguistics. The prime source of evidence for the names is the rune poems, of which there are three primary ones. These are brief poetic statements about the hidden lore of individual runes which also serve as aids to memorizing their names, order, and lore.

The three Rune Poems are the Old English Rune Poem, likely dating to the early ninth century and referring to the Anglo-Frisian runes; and the two poems referring to the Younger Futhark: the Old Icelandic Rune Poem, from a manuscript dating to the 15th century, and the Old Norwegian Rune Rhyme, from a 17th century copy of a manuscript now lost. Linguistic features of the two poems describing the Younger Futhark confirm that the lore contained with them dates to approximately the 12th century at the latest.

Note that none of these poems correspond to the Elder Futhark. The Old English Rune Poem is the most significant source for recovering names (and some lore) of the runestaves of the Elder Futhark (particularly of those staves had been lost in the Younger). The Gothic alphabet, which is not a runic alphabet but does bear some resemblances to the Elder Futhark, also named its individual letters and is a helpful source for this reconstruction as well.

Next: The Reawakening of the Runes