The symbolism attached to the patterns of the night sky, the constellations and asterisms, are a means of encoding learning and myth, and spurring new insights into the workings of the cosmos and how the Self relates to it. Since the 1960s and the computer analysis done on the alignments of Stonehenge by Dr. Gerald Hawkins of Boston University, many of our previously accepted timelines of human development have been challenged in a new field called archeo-astronomy. This in turn reinforces the idea that the more we understand the cosmos and humanity’s place within it, and how and when certain insights were gained in our intellectual history, the more opportunity there is for applying the insights gained from study of the heavens to one’s own development and understanding.

There is an inherent power that comes from being able to advise rulers and predict celestial events through careful study of the cycles that govern human behavior.

The ancient and likely original black art of astrology provided a means of applying knowledge held only by an elite. Eclipses and other seemingly irregular events are often predictable, and knowledge of them can be made to serve the purposes of those in power, but often more information than is available through casual observation is required. Precise record keeping, and the ability to encode and interpret knowledge, is also a necessity.

The astrologer who wielded this knowledge would have held a great deal of behind the scenes influence. The astrologer applying this understanding to his own purposes would have personal power unavailable even to the rulers he served.

One of the earliest civilations that applied Starry Wisdom that touched all facets of its society was that of Egypt. It is well-known that the Egyptians tracked the year’s first heliacal rising of Sirius, when after a 70 day absence it reappears in the east just prior to sunrise. This event was both the beginning of their new year and the harbinger of the critically necessary annual flooding of the Nile. But like much of Egyptian history and mythology, the connections go far deeper.

As far back as the 2nd Dynasty (beginning ca. 2900 BCE), a foundation laying ceremony called the Stretching of the Cord is recorded. The pharaoh, assisted by Seshat, the goddess of temple records, brings the cosmic order as derived from the stars down to earth to be reflected in the orientation of the temple being built. Seshat was normally depicted wearing a leopard hide, the spots of which were associated with the stars of the night sky.

Compare this aspect of the pharaoh as the agent of the gods on earth, the bridge between the worlds, to Lovecraft’s writings on the role of Nyarlhathotep:

“And it was then that Nyarlathotep came out of Egypt. Who he was, none could tell, but he was of the old native blood and looked like a Pharaoh. The fellahin knelt when they saw him, yet could not say why. He said he had risen up out of the blackness of twenty-seven centuries, and that he had heard messages from places not on this planet.”

The 19th and 20th Dynasties (spanning 200 years beginning ca. 1300 BCE), were those dominated by royal families who were loyal to the god Set. The pharaohs of these dynasties were especially interested in Starry Wisdom: one of the defining features of the funerary practices of the Setian dynasties is that of the astronomical ceiling, of which the most famous of those still intact is from the tomb of Seti I. 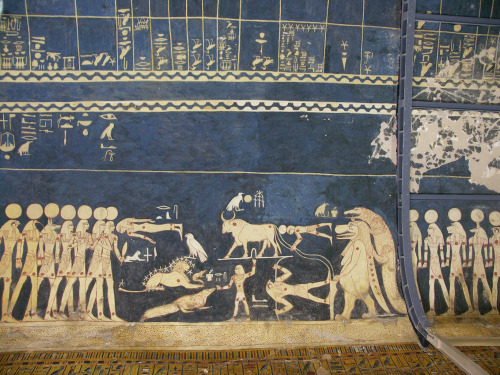 The astronomical ceilings functioned as maps for the pharaoh’s akh, or active essence, to become a star and find its way to its place in the heavens as one of the neteru (that is, the gods). This transformation is also told of in a story that dates from the time of Seti II, called “The Tale of Two Brothers”. In this tale, a farmer named Bata undergoes a series of ordeals and metamorphoses which culminate in his transformation into a star in the Big Dipper.