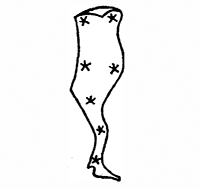 The Big Dipper was known to the Egyptians as the Thigh of the Bull, or simply the Seven Stars, and was very closely associated with the god Set; Bata began as a farmer tending to cows, and one of his final remanifestations was into that of a bull, followed by being reborn as a pharaoh and then a god who is a form of Set.

The Seven Stars, or more specifically an area just behind them called Re Sataue, are known in the Egyptian Book of the Dead as the Habitation that is Hidden. In one of oldest versions of that book the deceased, after surviving certain ordeals, then exclaims: “I have entered into the Habitation that is Hidden, and I hold converse with Set.” This further demonstrates the importance of the star cult to the afterlife at that time.

In another instance of the 19th and 20th Dynasty obsession with stellar symbolism made into action, there is a papyrus from that period commonly referred to as the Cairo Calendar. Its name in hieroglyphics can be rendered as “An introduction to the beginning of infinity and the end of eternity”. Originally interpreted only as a guide to lucky and unlucky days, recent academic research (by High Priestess Emeritus Patty Hardy) has demonstrated that it also describes a complex and detailed timekeeping system based on the rising and setting times for certain stars at specific times of year. Each marker is described as the “going forth” of the god or goddess associated with that star, further reinforcing the symbolic aspects of associating the rites and attributes of what one does on earth with what goes on in the sky above, and for providing the individual with a means to read and shape his or her destiny.

A key concept in the Starry Wisdom of the Egyptians is the word s’ba.

The word s’ba can be translated as star, door, or to teach. Why this curious complex of meanings? Those of you familiar with Egyptian soul lore may recognize the word ba, often rendered simply as “soul” but more precisely understood to be the individual’s enduring sense of self-awareness. Reading the word s’ba as “to impart a ba” makes the significance of “to teach” evident.

The door or gate is a familiar theme in the occult, and also the stories of Lovecraft, acting as links between the conventional reality recognized by society, and other realms of possibility. Gates must be transcended, often at great cost, in order to gain access to knowledge not available in any other way. The bridge between the cosmic and the earthbound is represented in the Mythos by Nyarlathotep, himself the true identity of the Haunter of the Dark, who is summoned from the stars via the Shining Trapezohedron. As the story says, combining the different meanings of the word s’ba: “These people say the Shining Trapezohedron shows them heaven & other worlds, & that the Haunter of the Dark tells them secrets in some way.”